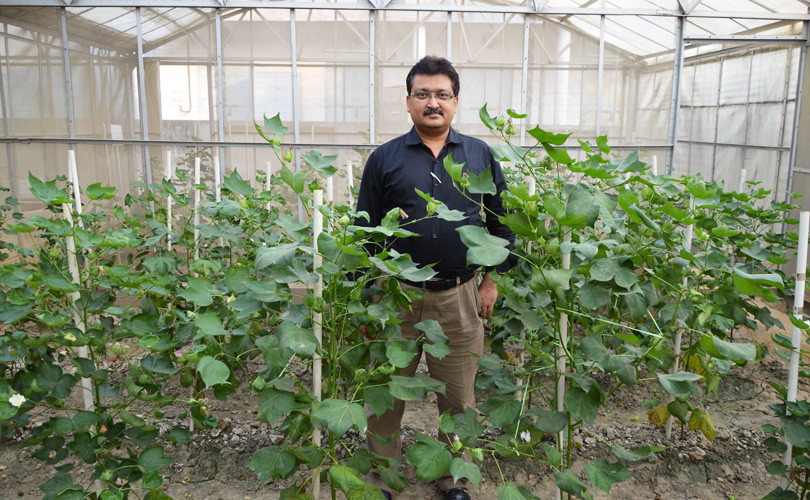 Desi cotton varieties have resistance to whiteflies but the chitinase gene isolated from a fern by NBRI can be stacked into them to extent the tolerance, reports Vivian Fernandes.

The National Botanical Research Institute (NBRI) has developed genetically modified cotton resistant to whitefly, Pradhymna K Singh, its Senior Scientist and principal investigator for the project told this website. NBRI is based in Lucknow. It is a constituent of the Council of Scientific and Industrial Research (CSIR).

Sources said the toxin is a chitinase gene isolated from a fern. A Google search says chitinases are enzymes that degrade the substance found in the outer coverings of insects.

There was a devastating outbreak of whitefly in Punjab this season. It has laid waste to cotton in many districts including Bhatinda, Abohar and Fazilka. Farmers not only lost the crop, but also the money spent on multiple sprays to control the sap-sucking pest. For six days in October they blocked rail traffic seeking higher compensation.

NBRI has been on the job since 2007. The transgenic was developed in 2012. After being tested in two generations in 2013 and again in 2014 ‘we developed confidence in the technology,’ Singh said.

The institute conducted limited tests at the Central Drug Research Institute (CDRI), another Lucknow-based constituent of CSIR. ‘In that study there is an indication that it would be safe for mammals,’ Singh said. But large-scale safety tests would have to be conducted to verify this and assure that it poses no environmental risk.

Singh said Maharashtra Hybrid Seeds Company (Mahyco) had approached it in 2010. It dropped out later because it was unsure of the country’s stand on genetically modified crops. Perhaps it had been singed by its experience with Bt brinjal. Jairam Ramesh was the environment minister then. He had blocked commercial cultivation of Bt brinjal though tests had shown them to be safe, and the Genetic Engineering Approval (now Appraisal) Committee had given its nod.

Singh said NBRI had offered the technology to the Central Institute of Cotton Research (CICR) in 2014 and to Punjab Agricultural University after the recent whitefly outbreak.

The ‘channel partners’ would have to approach the Review Committee on Genetic Manipulation (RCGM) for bio-safety trials, Singh said.

CICR Director, Keshav Raj Kranthi, acknowledged signing the material transfer agreement with Singh in June 2014. Singh has to transfer of material with the approval of RCGM.  ‘We are waiting for the official transfer. Once that happens we will move with speed,’ he said.

The plants with the resistant gene are ‘yet to be tested rigorously against different bio-types of whiteflies under natural pressure of the insect in Punjab, Haryana and Rajasthan (the states they infest) before we can decide whether we have the right material,’ Kranthi said. The testing can be done even in glass houses, he said.  Once the field evaluation is done, the process for bio-safety trials can be determined and the risks assessment done, Kranthi said.

‘Sucking pest control through conventional plant breeding methods is easy,’ Kranthi had said in an interview on 15 June, after signing an agreement to commercialize Bt cotton technology developed by a a Delhi University team. The Bt gene confers resistance against boll worms but not against sucking pests.

Kranthi said the whitefly resistant transgenic material can be stacked in cotton plants  in which resistance has also been created conventionally to extend the tolerance.